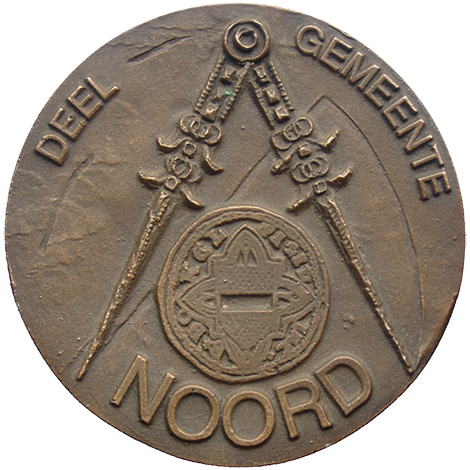 The topic this time is a medal of the Rotterdam city district Noord.

Between 1981 and 2014 a city council could decide to create city districts (deelgemeenten), each with its own people’s representation, called district council (deelraad), similar to city council (gemeenteraad). They also had a district executive council (compare with council of mayor and aldermen). Rotterdam was divided in 14 city districts, e.g. Centre, Delfshaven, Feijenoord, Hook of Holland and Noord. This democracy close to the people was short lived, however. At the city council elections of 2014, the city districts were replaced by city areas (gebieden), with area committees (gebiedscommissies). Most likely these did not function satisfactorily either, since after only eight years, in March 2022, the area committees were replaced by area advisory committees, with even fewer powers and authority.

A few Rotterdam city districts had their own Medal of Merit. City district Noord had its “Bokel medal”, named after the medieval Rotterdam family Bokel. The medal could be awarded to “persons who have contributed to innovative and permanent improvements for the whole city district”. The obverse shows a reconstruction of Rotterdam around the year 1300, plus a north indicating compass. The obverse shows the Bokel family seal between the legs of a large medieval compass of the type that in those times was used to measure land. The medal was designed by the Rotterdam sculptor and medallist Tom Waakop Reijers. Just ten copies of the medal were cast, with the first being awarded on March 23, 1994.

Taeke Friso de Jong, 1992, bronze, cast, 152 mm, NEPK2566 The occasion for the medal shown was the joint presentation of the three Water Boards